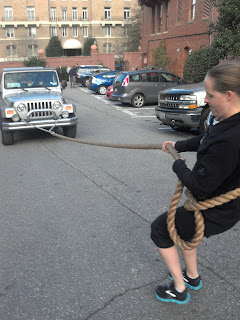 There’s not much to say that the above picture won’t tell you.

That’s a lot of warm-up, but we had good reason.
Yes, we have a shortage of equipment.
Yes, we’d already used partner resisted sprints a mere week before.
However, as we’ve been doing all along, classes are a progression and build-up, one non-equipment class prepping you for the next. And so it was, that Saturday’s class headed back out to the parking lot, but instead of bands, there was a rope, some chain, and a one and a half metric ton Jeep Wrangler waiting.

Class was split into designated groups of 2 or 3 people, with each team getting one practice push&pull before the main event started. Teams could divide themselves up however they saw fit (between who pulled and pushed), and could switch positions during the suicide as needed. The full length of the course was equal to roughly ~3-4 meters, except, while the first 2/3rds were relatively flat, the last 3rd was an marked incline. This made the suicide quite interesting, especially the second leg. 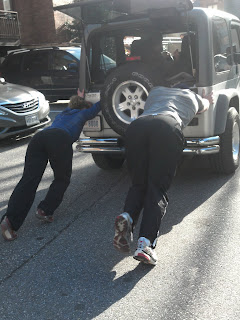 Each suicide was made up of four legs:

Each team was under the clock as the whole thing was done for time, though things were a little relaxed what with incoming parking lot traffic and all. Of course, it didn’t help that the jeep was laden with extra weight… 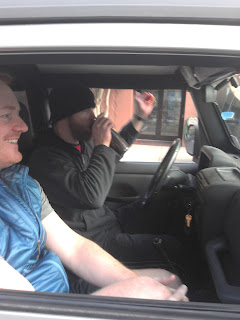 After each team had completed the first WOD, there was clamor for more. For a quick part two, everyone was given an opportunity to push the jeep as far up the parking lot as possible with a 30 second time-cap.

Just something a little different to enjoy the nice weather, and keep things fun. Although we can’t promise this will be a mainstay, the jeep enjoyed it so much it’s definitely looking forward to the next CFDC outing! 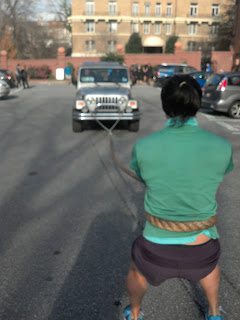