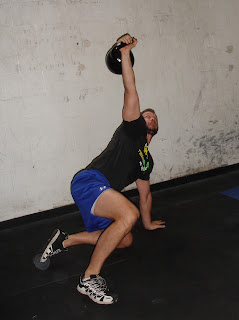 After spending the majority of last Sunday’s class reviewing KB swings, it probably wasn’t too surprising when we paraded out all the KBs (plus two new ones) for this Sunday’s class. Time to put that swing review to the test? Not really, since class did a grand total of ZERO swings this Sunday.

The TGU is a great core conditioner, and unlike a lot of things we do in CF, this movement generally isn’t done for speed. However, it is still a complex movement, consisting of a very particular sequencing of movements. It can take some getting used to, and because of that, class began practicing pieces of the movement without weight, to grasp the mechanics, before moving onto the full TGU with the KBs.  Since the focus was on execution, we’ve put together the following breakdown of the movement as reference: 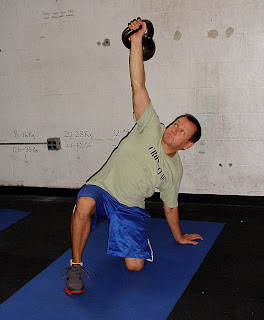 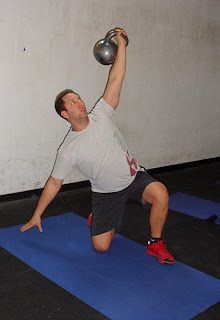 As Tom made mention of during class, and a few people discovered, there’s more than one way to execute the TGU, with limits of mobility and flexibility often being the determining factor. The method taught on Sunday is the technique favored for maximum control, and therefore, maximum weight. However, regardless of the method used or the limits of your flexibility/mobility, there are two inviolable rules):

(had we mentioned either of those rules yet?) 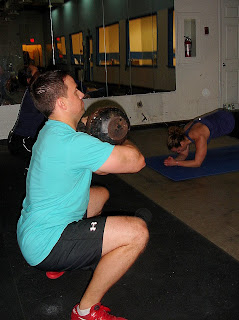 In teams of 2 or 3, complete a descending 10-8-6-4-2 ladder of single-arm front squats on both sides while your partner/teammates held a plank, and then switch. The front squats were done with (what else) KBs held in the front rack position. A quick reminder from Tom regarding the front rack for KBs was much appreciated: hand against the chest, lats tight and scap retracted with the elbow out to the side, so that the body of the KB rests in the crook of the arm between the forearm, bicep, and chest (not on top of the shoulder or cradled down against the stomach). 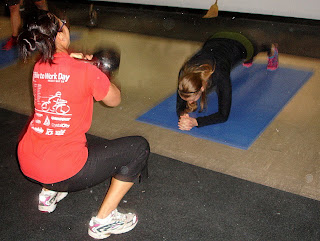 While every team moved quickly through the two exercises, no one was faster than the speed-demon duo of Steph and MC, who finished at just over 4 minutes (the closest team was over a minute behind). Well done ladies!

Since the KBs were out, and as we’d pretty much dedicated the day to working shoulder stability in conjunction with bi-lateral symmetry, we turned to 10min of windmill work. 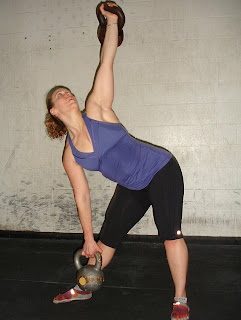 We covered the KB windmills in depth two months ago to the day when we were out in the park (“A LINE IN THE SANDY“). This Sunday’s class followed a similar progression, beginning with single KB windmills before moving on to doubles if people felt up to the challenge. After that it was all don…J/K.

Before putting the KBs away for the day, class closed out (for real this time) with one set per side of AMRAP KB-rows, beginning with the weak side. Of course, there was the farmer’s carry to get the KBs down to the storage room, but we won’t count that.

Awesome weekend of classes. I know people will be starting to drift out of town for the holidays, but we will continue to have classes through next Sunday, before taking next Tuesday off (Christmas day). If you’re in town, please join us!

And speaking of holidays and celebrations, many thanks to MC for snapping half of the following collage yesterday – it was just under 5 years ago that the pic on the left was taken as Steph and Chris learned the TGU at CFDC, and it was an awesome opportunity to get an “after” photo during yesterday’s class:

Just look at the size of those DBs! And for my part, can I just say that it’s been a long, sometimes strange, but always fun, road to travel with CFDC. See you all on Tuesday.