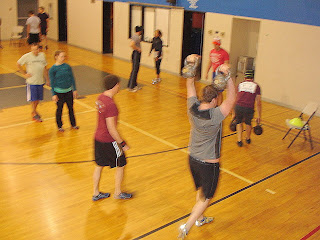 Thanks to Doron for the very apt blog title (and glad she was able to escape what was sure to be a zoo at the bakery). Speaking of escape from the holiday madness, it was an awesome surprise to have so many people turn out for the last class before Christmas. However, it did require some slight alteration to the day’s program. In the end, it was barely controlled chaos, but it was tough and, most importantly, it was fun. 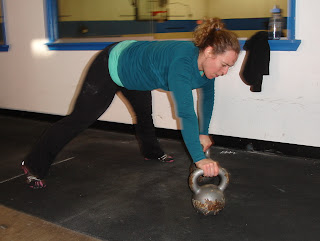 With nearly 20 people on hand, class was broken out into groups of 4, and each group was assigned a pair of KBs. After a quick demo of the KB Bear Crawl, the workout was explained: one member of each team began with the KB Bear Crawl in the studio, and then carried the KBs down to the court. The KBs were then handed off to a second member of the team who performed a full lap of the court with the KBs locked out overhead. Once they returned to the starting point, the KBs were again handed off to a third member, who carried them back upstairs, and began on the Bear Crawl once again. The team continued in this fashion, trying to complete as many rounds as possible within the 10min time frame. 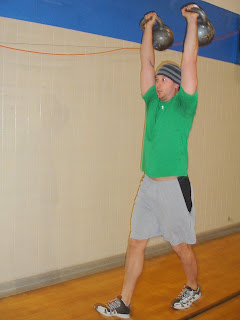 Oh, and just so no one was standing around idle too long, the entire team performed 5 burpees every time the KBs were exchanged between the bear crawls and OH carry. The OH carry was scaled down to single arm OH (which could be combined with a farmers walk), double KB carry in the rack position, or farmers walk. The KBs could be put down as many times as needed during the lap, so long as they weren’t dropped – don’t think the church would be thrilled about new holes in the BBall floor. 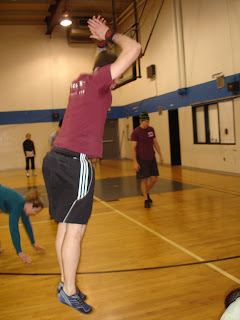 At the close of 10 minutes, the teams returned the KBs upstairs to the studio for round 2.

For the second workout, each member of team performed walking KB swings the length of the room with one of the KBs, and then once all had gone, the first member grabbed both KBs and then attempted to complete as many back-and-forth laps as they could carrying the KBs farmer-style. A grip fryer to be sure, unless you’re the Tom A, aka The Hammer, who seemed to go on forever, lap after lap, as though he were simply pacing in his study, finishing with 8+ laps by himself.

Great to have Mike Minukas back in class while he was in town visiting Mark.
Remember, no class on Tuesday! We will pick things up again on Thursday.
Enjoy your holidays, and safe travels to all those out of town.