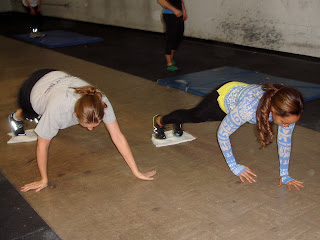 Well, the doom-inducing winter weather never appeared, and that was a good thing, as it gave us time to practice our gymnastics skills. While handstand progressions and HSPU-variations are not uncommon, tumbling is a rarity. Which makes it a perfect distraction from the sorta non-snow (yea, there was a little, but nothing worth paying attention to). 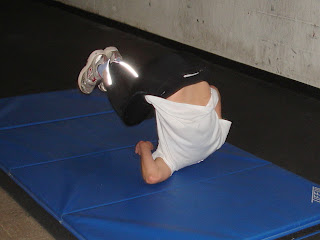 Rather than rolling right into the tumbling, class started off working through a series of progressive steps to help ease everyone into the mechanics of tumbling (which was really just “rolling”).

We started on our backs, in a tight balled-up position, with the knees tucked in to the chest, the shoulders pulled up off the floor, and the chin tucked towards the chest. The goal is an excessive hollow position, with the hips tucked forward, in order to create a nice rounded back which allows us to rock back and forth, rather than flopping from our butts onto our backs.

Step 2 – Backwards Rock to the Shoulders

Once comfortable with the tight tucked position, as well as garnering momentum from the hips and core (rather than trying to swing the legs), we began adding to the range of our rocking, allowing our momentum to shift our weight from the lower back to the upper back to the shoulders (just to the point where the back of the head was touching the floor).

For gymnastics purists, completing a roll with the head to one side is a step in the wrong direction; however, for the martial artists, it would be the logical next step. As with most things in life, there’s never one right answer. We prefer the off-set roll as it ensures that no one is rolling over their head – we sorta like our spines intact. The key to the off-set roll is to rock backwards, and just as your weight shifts to your upper back slightly raise one shoulder, so that the weight shifts to the opposite shoulder as momentum carries you backwards. We made sure to practice this drill favoring both shoulders to help ingrain the movement before moving on to the conclusion. 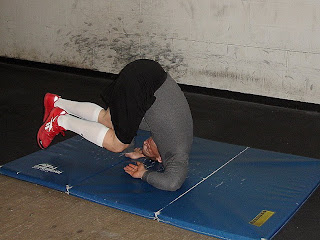 With two mats set-up roughly 20 feet apart, class worked through two backwards rolls, one on each mat and with each rolling to an opposite shoulder, before grabbing a towel and mummy crawling the length of the room to the back of the line. You know, just to really hammer that hollow, hips-forward position.

A nice break from the norm, and some great adjustments, and advancement, by people in class.

A little over a week ago, class worked single leg floor touches as both a preparatory movement and substitute for pistol squats. This time around, we used two sets of 5 SLFT as a warm-up for the single leg deadlift. 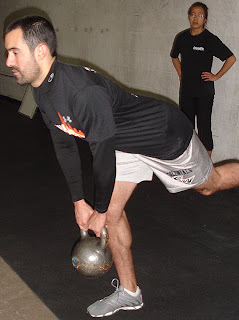 Although labelled as a deadlift, the single leg DLs are a top-down movement (weight starts at the hips and lowers down toward the shins), as opposed to picking the weight up off the floor as in a true DL. Thus, the movement is really more akin to the RDL, and it’s more instructive to look at the points of performance for the RDL when performing single leg DLs. After 3 sets of between 5-10 reps/side of the single leg DLs, class moved onto a nice easy finisher combining some handstands and ab-work.

That may read like gobbeldy-gook, but both exercises were meant to emphasize core control combined with constant extension (extension in both the legs and arms). 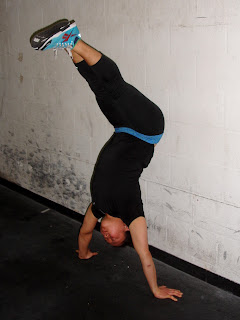 The HS crunch was simply a handstand combined with lowering first one knee towards the chest, then the other. This was naturally followed by lowering both knees towards the chest. After that, if comfortable, people were encouraged to try and lower their legs as much as possible in the piked position (as seen in the above photo)

Of course, the trick to all of the above is keeping the elbows fully extended while controlling the movement through the core. This can prove slightly problematic, and so to emphasize the need for aggressive extension into the floor, class closed out with a few rounds of 90-degree handstand holds. 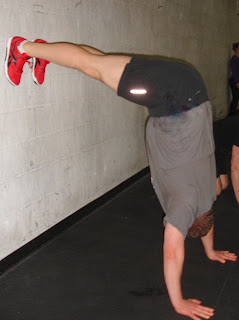 These force you to push your hands into the floor so that you can simultaneously push your heels into the wall. Without one or the other, you won’t be able to maintain the 90-degree piked-position.

An hour and a half of skill work is no joke, even if it doesn’t leave you a sweaty, gasping mess. Of course, with the slower pace of things today, that probably means something wicked is in the works for tomorrow. See you all then!