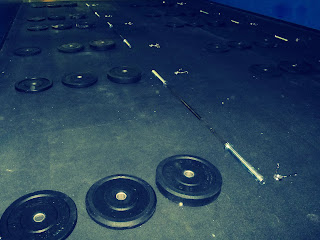 Resurrecting the bar is more like it! Finally, after weeks of planning and finagling, we were able to deliver on our promise of bars and bumpers for the temporary classes. To kick things off, we decided to give the forearms a break on Thursday, and damage the shins instead.

Interesting title, but it sorta sums it up. Each team decides on a weight to use for the DLs, and then each team member performs 12 DLs to start things off before moving over to their designated space for the DUs. A set of 100 DUs followed each round of DLs, but, unlike the DLs, were a collective effort…with a catch. DUs were done as max reps in a single attempt. So, P1 begins, and if they get 100 DUs in one shot, then the whole team headed back to the bar. However, if P1 only got 20 DUs before breaking, then P2 stepped in with 80 DUs still left to complete. Teammates rotated in this fashion until all 100 DUs were completed, and then went back to the bar to start on the round of 10 DLs. 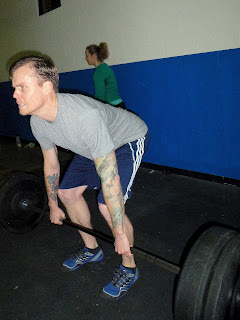 For those without DUs, we came up with the most confusing, confounding, and complicated system ever as a substitution:

Mixed Teams (where some could DUs and some couldn’t) = those with DUs went first, and then those without DUs did single skips in a 4:1 ratio, EXCEPT, a person doing single skips could no more than than the highest number of DUs achieved. For example, if P1 did 20 DUs, and P2 did 22 DUs, then P3 could only do 88 single skips (22 x 4), which left the team with 36 DUs still to do. Of course, if P1 hit 50 DUs, and P2 completed 30 DUs, then P3 need only complete 80 single skips in order to fulfill the 100 DU requirement. Lost? confused? Don’t worry, you’re probably not alone. But hey, if mountain climbers and high knees and burpees mixed with single skips don’t push you to work on those DUs, then maybe massive headaches trying to decipher the substitutions will.

Single-Skip Only Teams = much easier than the mixed teams…sort-of. Each person in the team did 100 single skips at a time until the team had reached 400 single skips. That meant one person (in a team of 3) was going to do 200 single skips each round. For those that wanted to share the load, a different person would take on that burden each round.

Awesome to have bars back at CFDC, even if only a limited offering. Expect to put in some serious time building those calluses back up in the coming classes! Speaking of coming classes, the weather looks to be extremely un-January like this weekend, so best to bring along a pair of shoes you can run in as well as lift. See you all on Saturday.