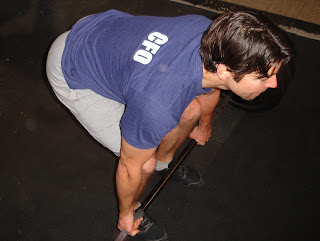 After being led to believe class would have to be outside today due to a function in the studio, we were more than happy to find out late this week that we had been faked out: no out door class! We just had to celebrate, which, in CFDC, means classic lifts. 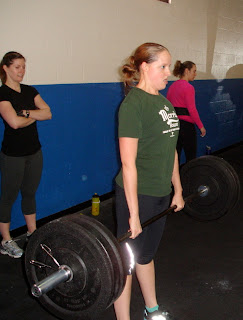 With all that hamstring work in the warm-up, you knew some sort of DL was coming. With a finite number of bumpers, Saturday’s program opted for a slightly higher number of reps than usual: 2 sets of 8, followed by 3 sets of 5. Going for higher reps on the DL, whether 10+ at moderate weight, or 5+ at moderately heavy weight, can help reveal issues with your body position that aren’t always obvious at heavy weight. For example: lifters allowing their shoulders to internally rotate, reaching the bar to the floor which leads to the back rounding. 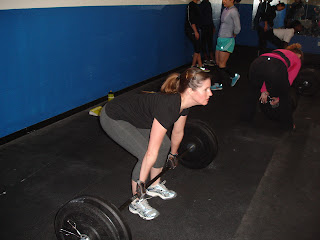 A great cue for this, and one we’ve often used before, is to imagine squeezing a pen/marker/etc. in the armpit; the act of forcefully squeezing the arms in keeps the elbows in tight, externally rotating the shoulders, which helps set the lats and shoulders. Often you hear this as the cue “pinch the shoulder blades.” Keeping the elbows squeezed tight against the body – pinching that imaginary marker in the armpits – keeps the shoulders from rounding forward, which is what leads to a rounded back. 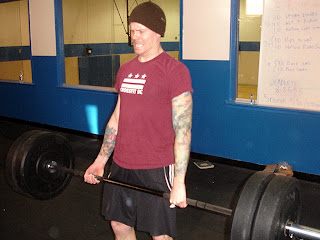 To put our positioning cues to work, we turned to one of the simplest, yet most effective DL met-cons out there: DL and burpees. The size of class and limitation on temporary equipment meant having groups work on the same bar in a follow the leader fashion, with DLs done at one end of the room, and burpees at the other. Weights on the DL were RX’d at roughly 60% of a 1RM, more or less.

To close out, class worked through a quick set of dynamic cool down movements and stretching. Of course, part and parcel of each and every class these days is putting the equipment away.  Normally, our de rigueur column of members hefting equipment back to the storage room is unremarkable…except when Ami’s around: 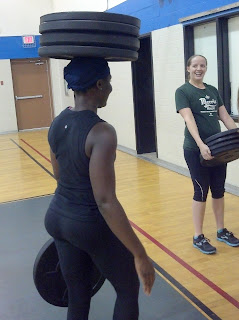 Don’t forget about our inter-construction preview at the new space tomorrow (12:30 to 2:30, 1722 14th St, NW). We’re really excited to have everyone to have everyone tour the up-&-coming space. You’ll have to excuse our mess, as the construction crew has been hitting hard these last few weeks, but we’re amped to help you envision the next step of our CrossFit career. See you all then!