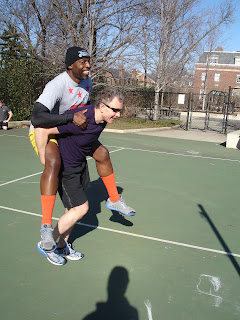 If Saturday was a pleasant fake out, being allowed to use the studio when we though we would be outside, Sunday was not quite as much so. We knew we wouldn’t be using the studio Sunday morning, but had a Plan B in mind since we would have access to the court instead. Except that changed early Sunday morning. OK, no problem, onto to Plan C: we’ll just grab some KBs and head over to the park. Except when the time came, we couldn’t even get back in to grab the KBs. OK, onto Plan D…

Honestly, Plan D took a bit to come around to, but after a pretty thorough warm-up of the usual suspects (inch worms, spider lunges, hamstring walks, and some dynamic, faster paced stuff to get the blood going), class got on track with a few rounds of Curb Squats. 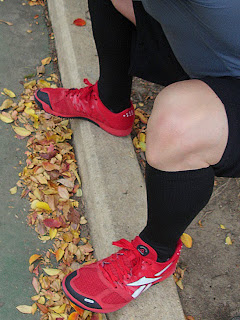 Curb squats are basic body weight squats done on a curb with the front of the feet hanging over the edge. It doesn’t sound like much, but hanging the feet out in space forces us to shift our weight back off the toes – often heard as the cue “from the heels.” Relieving the weight from the toes centers a lifters weight, and thereby helps the lifter recruit the maximum power available from the glutes and quads.

Class worked through a few rounds of curb squats, finishing with a unique take on the Wave: the entire class dropped down into a curb squat and held it, while starting at one end and moving down to the other, each person performed a quick up and back down into the hold position, waving down the line. Two times through seemed more than enough to get the burn going in the legs. 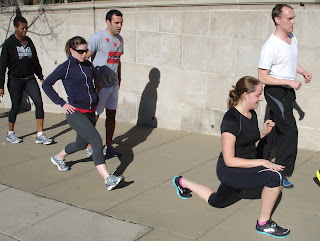 After a quick 600m jog down S. Street to Mass Ave. and back again to keep everyone warm, class arranged themselves in groups of 3 for the main event. The workout began with 15 reps of a twenty yard out-and-back partner carry. Most teams opted for the piggy back, which was a good choice considering the short distance. Each teammate had to complete at least two of the carries, although the order could be broken up in any manner the team desired. After completing the 15 partner carries, the team moved onto a 100 push-ups, broken up in any manner the team desired. 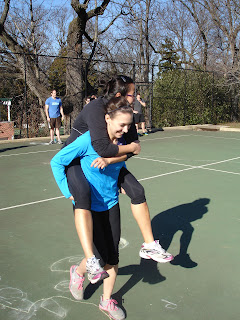 Then came the final event. Teams jogged down S Street, stopping but stopping at 24th, just shy of Mass Ave. They then began 1.5m uphill lunge, from 24th to 23rd Street. This usually starts off OK, and then quickly becomes a lesson in pushing through the burn. 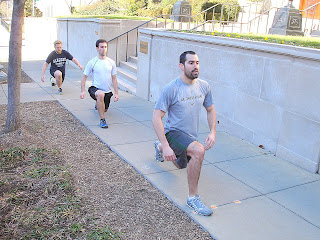 Kudos to the ADB-team (Alex, Dray, and Bill, all pictured above), who set the teamwork standard of going single file, coordinated lunges all the way up to 23rd, with Alex calling out “left…right…left” the entire way!

Teams finished off the workout by jogging the remainder of the way back onto the court in the park. After some much needed cool down exercises, including some heel walks, knees to chest, and sideways hip rotations, everyone was released for the day.

We can assure you that we’ll be back inside – back in the Studio – on Tuesday with our beloved barbells. Which is a good thing considering it’s going to be downright chilly out. Also, a big thank-you to everyone who stopped by for the construction walk-through yesterday at the new space. We’re really excited to get the doors open. It’s so close, it’s painful, but having all of you see it, and seeing how excited everyone was by it, makes the wait completely worthwhile. Thanks!