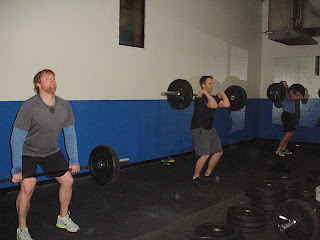 As promised, Tuesday’s class featured plenty of barbell movements to sate everyone’s hunger after the equipment starvation of Sunday. 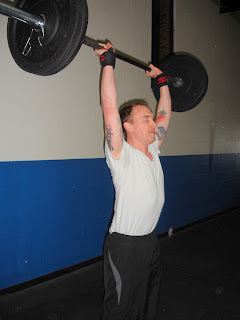 With everyone warm and relatively loose, class broke into groups of 2 or 3 and then proceeded to go through a few rounds of prep work to get ready for the main event. Each round added an additional exercise onto that which preceded it. So, the first round was just 5 DL with moderate weight. The next round was 5 DL plus 5 hang high pulls. The third round was DLs, Hi-Pulls, and 5 Front Squats. Groups could add weight as desired, keeping in mind that this was prep for the coming workout, not a strength session. 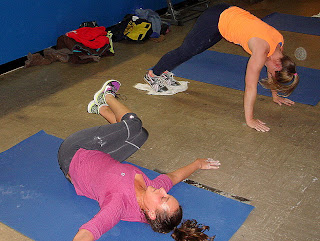 Everyone started with the DTish portion of the workout, knocking off as many rounds of 9 DL, 6 Hang-Power Cleans and 3 Push Press as possible. While the first round wasn’t astronomically hard, it certainly gave you an inkling as to the role grip would play in the coming rounds. After 3 minutes of work on the bar, athletes moved right over to the tile floor for another 3min AMRAP session of 9 Mummy Pikes coupled with 6 Windshield Wipers (over and back = 1 rep).

This isn’t the first time Mummy Pikes have made an appearance in a workout – they’re an interesting amalgamation between mummy crawls and inch worms, really hitting the hip flexors and abs. 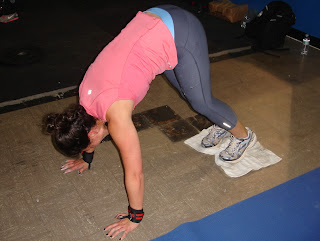 With your feet on a towel, keep your knees extended and slide your feet as close to your hands as possible, then reversing and sliding the feet back out till your in a plank position. The trick is in keeping a hollow body while in the plank position – don’t allow the hips to sag towards the floor. There was also a short 3 minute break in between rounds – just enough time to catch your breath and realize how shot your grip and hip flexors were before starting the next round of DT.

Hope everyone is staying warm during this strangely seasonal weather (strange because the rest of the winter to date has been so unseasonal). See you all on Thursday.