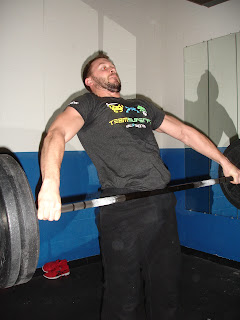 What better way to beat back the cold than with some toasty traps? After Tuesday’s DTish and Thursday’s snatch-pull-spree, we should all be ready to heave those snow shovels around.

To begin the days technique work, class began with three sets of pause snatch pulls (AKA Segmented Snatch Pulls). The idea behind adding in the pauses is to get the lifter to slow down and concentrate on the feeling of each sweet spot while standing up with the weight. This in turns builds in muscle memory, setting a lifter up to transition into pulls at regular speed while still feeling the transition through each of the positions. Thursday’s class utilized three positions during the pause pull: (1st) Below Knee, (2nd) Above Knee, (3rd) Mid Thigh/Quad, & then finishing off with a full extension and shrug to start initiating the high pull. 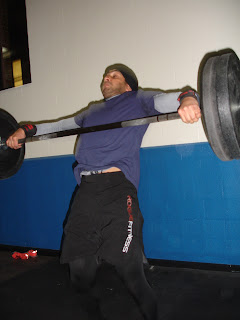 Less than two weeks ago we utilized the dragging pull as part of our warm-up to the day’s OHS workout (“UNDER THE WEIGHTER“). We use the “drag” drill to emphasize the need of keeping the bar in close, against the thighs, when performing either Olympic lift. You can often see lifters, especially CrossFitters without supremely awesome and attentive coaches, tend to drag the bar up their shins, but then let the bar get away from their thighs once they pass their knees. Many times this is a product of an athlete trying to rip the bar from the ground. The problem is that mutes the real power garnered from full extension of the hips.

When performing any lift from the hang, be sure to pick the bar up as though you were going to take the lift from floor. This ensures you are in the proper set-up position as you reach standing. From the standing position, drop down into the hang position, pausing at the bottom to make sure the knees are out and the chest is up, with shoulder blades pulled back and down away from the ears. From the hang position, slowly extend back up again, dragging the bar up the thighs while simultaneously pushing the hips forward into the weight.

The two technique pieces were then combined for the strength work-out, which featured full pulls from the floor.

The focus for the strength portion of class was on proper technique – hitting the positions and movement patterns from the technique movements – while operating at full speed and on the clock. 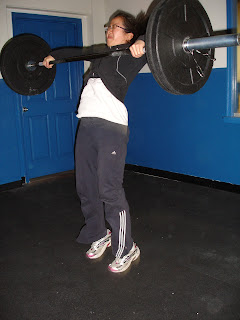 Each high pull was taken from the floor. Athletes could either drop the bar and reset in between reps, or could simply touch and go. For a few of our more experienced lifters, the reps were upped to 3, which normally wouldn’t be a big deal, except that the majority of people were sharing a bar, which meant athletes were not only lifting on the minute, they had 30 seconds to set up, perform all three reps, and then get out of the way so their partner could go.

The advantage to using the on-the-minute approach to pulls is how it highlights how a lifter is moving the weight. While the first few sets shouldn’t be much of an issue, you’ll know by the later rounds whether you’ve been using good technique or not, even at moderate weight. As the primary movers, your arms and shoulders will give out long before your hips do. Key in on popping the bar up with the hips (almost pushing it up with the hips) to get the weight moving. 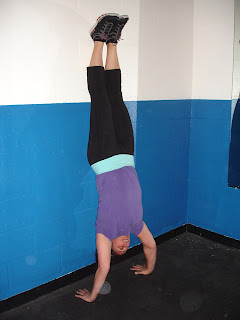 The 6pm class ran slightly long owing to the larger size of class and a longer hi-pull session. As a finisher, everyone in class kicked up into a handstand and then held for as long as possible. Congrats to Andraea (pictured above) for taking the prize at 3 minutes and 5 seconds (not the first time she’s crushed a static body hold finisher at the end of class).

The smaller size of the 7pm class allowed them to move through the hi-pulls a little faster. As a result, they received a different sort of shoulder-frying finisher in the form of a 6min AMRAP of 18 DUs and 6 hand-release push-ups. 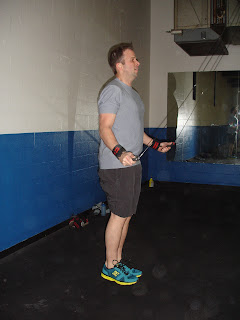 Things are really progressing at the new gym space, and we’re hoping to drop some much anticipated bombshells in the very near future. Until then, though, hope to see you all this weekend, where we will be having some awesome ass-kicking workouts that will take place inside the gym!