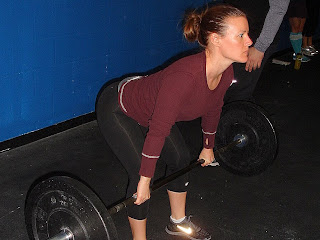 It was hard to top Saturday’s birthday beatdown, but we gave it a shot on Sunday (being able to throw back in the plate push goes a long way in making a workout successful).

*Another amalgamation warm-up exercise; this combines the H2W stretch with the band resisted GMs. The goal was to add resistance to the movement, but also to provide a target for everyone to reach back for (rather than just bending at the waist, which still proves to be a perennial problem for some). 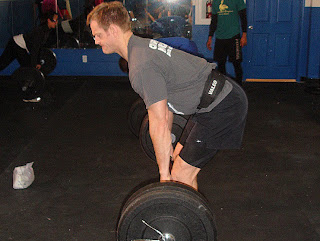 Class broke off into groups of 3 or 4 to a bar, and started off with two sets of 10 RDLs (one set with the bar only, one set with light weight). After the second prep set, individuals began to rotate through 3 different exercises with prescribed rest in between each:

Groups could add weight to the RDLs as desired, and the use of straps was allowed to encourage the use of double overhand grip throughout the workout. 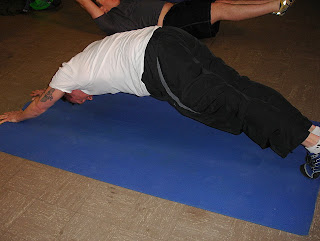 It’s been a while since we’ve included the prone hollow position, but it’s scaled-up version of the plank (same basic trunk position) that resembles a face-down version of the hollow hold (arms overhead, biceps squeezing the ears).

Hollow position work has become a mainstay of our focus over the past year, primarily because of it’s laser like focus on controlling the entire core, especially the hips. Hip position, coupled with building strength through the trunk muscles, is what dictates good posture during heavy lifts, especially those where the mid-section is often the weakest link (like DLs, RDLs, and GMs). To pull a quote from an earlier blog-post: “Remember, control is the basis of form, and form is the foundation of each and every movement we perform. Learn control, apply the form, and strength, speed, power, and fitness will follow naturally.” 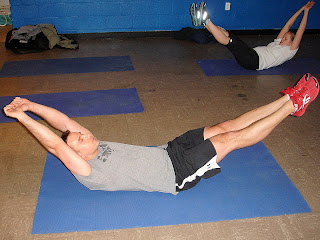 After completing 5 rounds, groups broke down the bars, then grabbed at least one plate and headed down to the court for the met-con.

Each plate push was equal to mid-court and back , while each suicide was made up of 3 different lengths (meaning an individual sprinted out to the first set of cones and back, then the second set of cones and back, and then finally to mid-court and back). Each team had to complete all 9 reps of an exercise before moving on to the next, and the 9 reps could be divided up amongst the team however they decided. 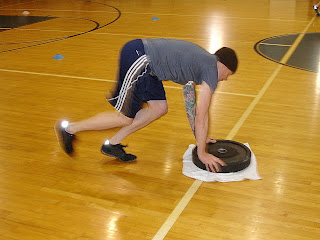 Teams continued to rotate through as fast as possible to achieve as many rounds as they could. No one quite achieved the magical 3-rounds, but at least one (maybe 2?) teams came close.

I trust everyone is looking forward to the surreal, mid-week warm-snap DC’s going to enjoy this week. Hopefully we can take advantage of it. See you all on Tuesday.