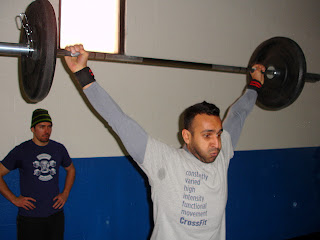 A slight cold snap would not deter people from getting to the gym to get their snatch on Saturday morning. Good thing we had lot’s lifting planned, and plenty of workout for everyone.

As we have in recent workouts where the focus was on an Olympic lift, class began by working through a series of prep sets, designed to build muscle memory and prime the body to execute the lift with minimal thinking.

A combination of two previous prep movements, this began with an un-weighted pause snatch pull (pausing below the knees, above the knees, and finally the upper thigh), but instead of a simple shrug, actually finished off with a high-pull (a high-hang high-pull).

Since the first prep set utilized the high pull, we coupled the drag drill with an actual power snatch to get the bar overhead and then followed up with a pressing snatch balance. Those unfamiliar with snatch balance completed 3 OHS after snatching the bar.

Adding a little weight, but still utilizing the drag and power snatch, we closed out the prep sessions with some heaving snatch balance, starting with the feet already in the receiving, or squat, stance but adding a slight dip and drive to the bar. Those who had not done the pressing snatch balance in the previous set did another 3 OHS. 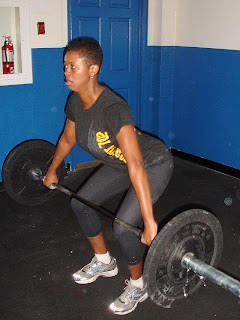 Building off the prep sets, groups began adding weight while working through sets of 1 high-pull taken from the floor, followed by 1 hang power snatch, and finished off with 1 heaving snatch balance. Once the bar left the floor for the high pull, it was to remain in the hands (no setting the weight down) until all three movements had been completed. As with the prep sets, those who were either unfamiliar or uncomfortable with the snatch balance replaced it with an OHS. Additionally, groups were instructed to add weight across all five sets as able/comfortable.

By the time the met-con rolled around, everyone should have been primed and ready for some snatches. Groups loaded the bar to agreed upon moderate weight for the snatches, grabbed a yoga mat and a spare bumper plate, and then lined up for the workout. Everyone started with the snatches in a follow-the-leader style set-up, working in 30 second blocks of work followed by 30 second blocks of rest. The goal was to set a base line during the first round, and then push yourself to maintain that rep output for the remaining rounds. True, that’s much easier said than done, but utilizing proper form – using the hook group, moving the bar with the hips, keeping shoulders back so the bar stays in close – will go along way in helping work towards achieving that kind of consistency. 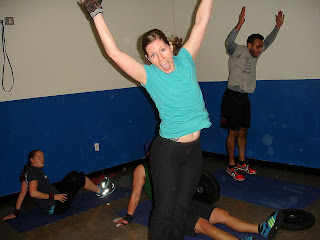 Awesome to have such a big turn-out on Saturday. Hopefully that doesn’t mean everyone’s planning on bailing tomorrow just because of some insignificant football game.