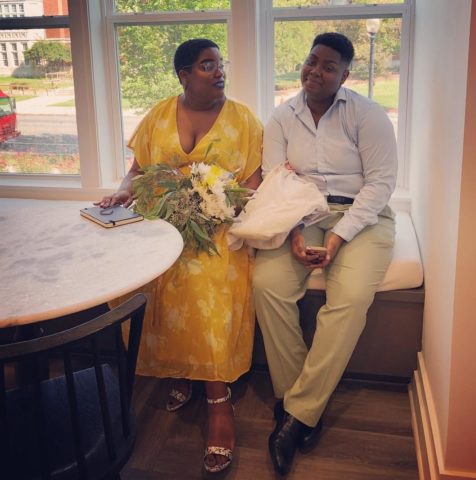 Gaby and Danielle W. joined CrossFit DC together in January of 2018 after Danielle’s extensive research, and they got married September 5, 2018. We’re so glad to have them as a joint member spotlight this month!

I’ve been doing crossfit almost a year and a half and I started out at CFDC U street. My spouse, Danielle (Dann for short), started watching the crossfit games documentaries on Netflix and was like “we should totally do this!!” And I said sure. I played team sports all throughout grade school so working out on my own was always incredibly boring. I was looking for something that was pre-programmed and had someone who would hold me accountable. And I didn’t choose CFDC, Dann did all the research and picked it. They decided on CFDC because it actually had an intro/elements class and at least one person of color on the website and maybe a rainbow flag? It was and is important that we were at a box that didn’t just have a bunch of loud straight white dudes.

Favorite: All presses and jerks, they make me feel like a badass.

Listen. I play a LOT of videogames.

I want to be able to do a strict pullup and a strict pushup. I never been able to do either of those and I know it’s going to take a really long time to develop those muscles, but I’m looking forward to it.

That you don’t always have to give 100% during a workout! Coming from competitive team sport environments where everyone expects you to damn near kill yourself at practice or to win a game to Crossfit where everything is individualized was incredible. No one is out here giving you grief if you can’t or won’t run or aren’t comfortable doing a particular movement. And half the battle sometimes for me is just showing up to class. From there, I know my body well enough to figure out what amount of effort I’m able/willing to give. Because I’m not about to pass out over doing 50 burpees or chip a tooth during a metcon (again). That would be silly.

Honestly? Having coaches who are confident in my ability to do certain movements and who see that I’m much stronger than I think I am inspires me to push myself. I know I just talked about allowing myself to not give 100% during workouts but the combination of a low-pressure environment with the encouragement and insight the coaches offer helps me to simultaneously respect my hard limits, and push myself to try new movements and lift heavier.

I was a three-time debutante. It was weird. (It’s an outdated, misogynist Southern thing)

To listen for the *clink* of the bar against the weights when you set up for a snatch, clean, or deadlift. That helps me engage my shoulders so I’m not accidentally pulling with my lower back.

Also: “YOU’RE NOT SUPPOSED TO DEADLIFT WITH YOUR BACK!!!” Which is what Dann said to clarify that the deadlift is, in fact, a hamstring workout.

I’ve been at CFDC for about a year and a half. I first encountered Crossfit totally randomly, I think I was in the gym and they were showing the Crossfit Games on one of their 8 million TVs. It must have caught my attention because I ended up watching one or two of the Netflix documentaries about the Games later and got really into the idea of going. I was really fascinated with the women competitors and how athletic they were. I think diet culture and misogyny really causes women and AFAB (assigned female at birth) folks a real fear of getting muscular, getting “big”, because we’re always told that being smaller is better. It was really refreshing to see women who were super jacked, who were throwing around huge amounts of weight and being celebrated for doing that. (Also, I thought they were hot).

I chose CFDC specifically because it seemed like the most diverse gym from social media–it was important to me that everyone at the gym wasn’t sculpted from marble. It’s one thing to say that your sport, your workouts are accessible to all people and another thing to value members with different bodies enough to put them on your social media. I did some real snooping, looking up people’s websites and instas and finding old videos on Youtube. The fact that there were a bunch of super normal, average looking folks around doing workouts (and the fact that CFDC had elements classes) made my decision for me.

Least favorite: Side planks (especially the left side!).

Fighting for abortion access in the south and midwest and going to concerts. Playing a lot of Stardew Valley. Only barely refraining from buying t-shirts with lifting puns.

Deadlift 250+ by the end of the year. Catch a snatch in a squat without falling on my butt. Figure out the physics of a double under. I’m also thinking about exploring competitive lifting.

What my body could do. I’m bookish and don’t have a lot of rhythm, I’m just generally a really cerebral kind of person and grew up pretty disconnected from my body. And I’m fat, and I’ve always been fat and was, explicitly and implicitly, told that my fatness meant that I could never be athletic. So it’s been a real journey unlearning that message and discovering that I’m actually very capable–of being athletic and of improving athletically.

I follow a combination of crossfitters, weightlifters and fat positive activists on instagram that are nearly all either women, queer, fat, or some combination of the three. Gym culture is often steeped in misogyny, ableism and fatphobia and it’s really critical for me to see people who look like and identify like me not only moving weight and kicking ass, but doing it in a body that society tells them doesn’t belong (not in the gym or anywhere else). I’m happy to share instagram recommendations!

I’m a former emo kid. The day the coaches bust out some sweet sweet early 2000s pop-punk is the day I PR everything.

Any and everything about my feet. My feet naturally turn outward pretty far, so I’m always thinking about how to set them to create a better base.

Also, this is going to sound weird, but when coaches physically demonstrate or actually physically adjust me to a cue. Like I said above, I’m not super connected with my body, so I have a hard time with cues like “your feet align with your toes” or “your back should be in a neutral position”. Like, what does that mean! Neutral to who? So it helps when I can see what I’m supposed to be doing.

Also, this is actually a cue from yoga, but remembering that I have to spread my legs wider to account for my belly during any bending over movements. Cues that account for different bodies always kick ass.