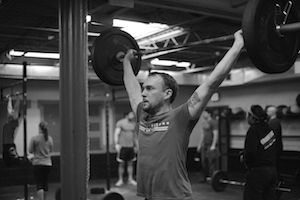 Aside from entering the odd skateboard contest in his youth, Paul mostly stayed away from competitive athletic endeavors. However, skateboarding gave him two skills which have been transferable to sports he pursued later in life, kinesthetic awareness and the curiosity to dissect and understand technique. These skills were fundamental to his success as a club cyclist, college swimmer, and league champion bowler – activities he picked up in graduate school when he should have been in the lab.

Fast forward a few years and after relocation to DC – at the behest of his brother and after hearing about Tom, Chris, and CrossFit DC, Paul finally tried CrossFit. He immediately jumped in the deep end. CrossFit felt more like play than work and the constantly varied movements fed his curious nature. Understanding the techniques behind these movements has been a fascination and helping others to move safely and efficiently has been a reward. Since Paul did not grow up as a traditional athlete, he’s had immense inspiration in seeing non-traditional athletes blossom at CrossFit DC. Outside of the gym, you’ll find Paul either baking bread or building motorcycles.